If you are planning to buy your first Ukulele (or grow your collection) then you’ll have come across one big problem. Just what size ukulele should you buy? Unless you plan on buying one of each size (an expensive solution to the problem) then you’re going to have to pick one size. But just which one? You might have a strong inclination from what you have seen, but there are some other factors that you might want to consider before you splash your hard earned cash on a ukulele.

Just to cover all the bases, I want to make sure you know about the four main types of Ukuleles. There are a few other types of Ukuleles and offshoots which fall somewhere in between these main four, but the vast majority of the time you are going to be playing one of these four (at least to start). In size order they go Soprano, Concert, Tenor, and Baritone. 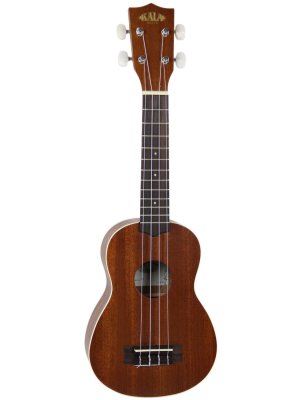 The Soprano is the smallest and so people with large hands are often put off. For the record I’m 6’3 and have long (but thin) fingers and I find a soprano playable, but difficult at the higher frets. If you have very thick fingers then this isn’t for you. The advantage with the smaller neck is the strings are generally loser in standard tuning making it really easy to hold chords and bend strings though you’ll only have between 12-15 frets to do this on. They are also cheaper due to the lower amount of resources used in their production. The smaller size also makes them generally quieter.

If you are really unsure which size ukulele to buy, I’d recommend a Soprano. In many ways it is the  classic Ukulele size and they are usually 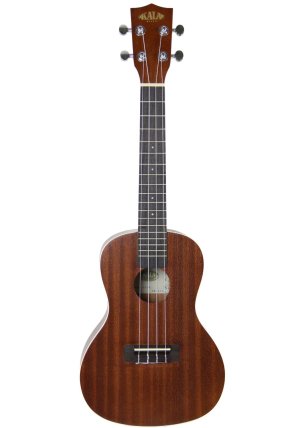 A concert ukulele is the second smallest and has become more popular recently with people like Jake Shimabukuro and Sophie Madeleine playing Concert size Ukuleles. They have a tighter string tension, larger gaps between frets and more frets making them better for soloing on and yet still very easy to press the strings down. The slightly longer neck means the Ukulele will sound a little brighter due to the extra tension in the neck and with a larger body, they are usually louder than Sopranos.

This is actually my favourite size to play, it’s a goldilocks to the small soprano and larger tenor. The only major downside is that they don’t have as many frets as a tenor nor the extra portability of the Soprano. If you think the soprano is too little and the tenor is too big, then I’d recommend a Concert.

The Tenor has won a lot of fans due to its larger size which benefits low g (or “liner”) tuning and soloing on the higher frets. Many players who switch from the guitar like this size as it is more familiar than the smaller Soprano and Concert. It’s easier to find Tenor ukuleles which come with electric pickups, so you to plug into an amp (great for live performances).

Sure, you can get Concerts and even Sopranos with this feature (and plenty of Tenor ukuleles without) but it’s more common on Tenor ukuleles. The longer neck provides even stronger string tension leading to a brighter, bolder sound making it much better for low g string tuning and even baritone tuning (more below). If you are a guitarist looking to switch to the Ukulele, or have very large hands then I’d recommend checking out a Tenor. 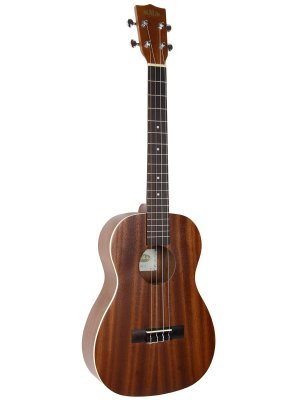 The baritone is the big daddy of the Ukulele family, it’s basically the same size as a guitar and is tuned the same way as the four highest (in pitch) strings on a guitar, DGBE. Or  This makes it really easy for guitarists to adapt to and perfect. If you like the ukulele but think it is just a bit to high in pitch (one of the key traits of the Ukulele but anyway), then you’ll love the Baritone.

The different tuning helps to reduce the string tension but it will still require more than a Soprano ukulele but produce a deeper sound. The super large frets are great if you have chubby fingers or want to do complicated fingerpicking and solo style (with out the distraction of those two extra strings on a guitar).

So now we’ve looked at the basics of the different sizes of Ukuleles you probably have a pretty good idea, here are a few factors you’ll want to consider when you pick your ukulele.

If you still don’t know then the best advice I can give you is find a place where you can try out the different sizes of Ukuleles. I know for some people that will be very difficult if you live in a really remote place without a good music store but ukuleles are becoming more common.

[Check out our guide to the best beginner Ukuleles for 2015]

What size Ukulele do you have? Why?

4 thoughts on “What Size Ukulele Should You Buy?”