There aren’t many more annoying chords to learn when you start out than the E Major chord. Sure some random jazz chord will test your finger dexterity more than the humble E but you won’t come across it nearly half as much. Luckily there are a few tricks to get round the E chords inherit difficulties so you can play it more easily.

What is the E chord and What makes it so difficult? 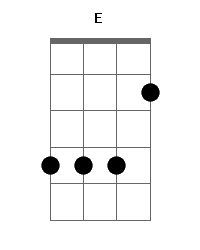 The standard (or at least most common in tutorial books) way to play the E chord (see shape below) can be played in two different ways, each with its own challenges. The first is using four fingers spread across two frets and with three all right next to each other. The causes cramping between the fingers and can be difficult to get good pressure on each string, especially with a thinner necked ukulele. It can also take a while to get four fingers in place and slow down your transitions from other chords.

The second involves barring the strings on the fourth fret except the A string which you press down at the second fret. This requires flexible fingers to put the right pressure on three strings and not mute the A string. Either of these methods will take time and practice to really get right (more so than many other beginner chords)

Luckily, there are some alternative ways to play the E major chord which you may find quicker to change to and easier to get a good sound from with your ukulele. I suggest you experiment and find the most comfortable with you.

This is my personal favorite alternative but it has its own difficulties. In this case you barre across the strings at the fourth fret using your index or middle finger (as you wish) and then fret the A string on the seventh fret. This is the same as one of the D chord variant shapes. I find it easier to change to and more likely for all the strings to resound well and not be muted. However, if you are not good at barre chords then this will still be difficult for you to play and isn’t ideal for beginners. 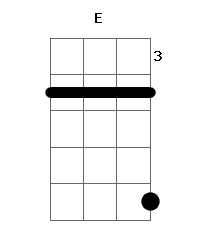 One of the most popular alternatives is the 1402 variant. It doesn’t require any barring and is very similar to the more well known E7 chord. It requires a bit of a stretch with your fingers and you need to be careful not to mute the open C string but other than that, it is a good alternative. Personally, I don’t use this option too much as I find it takes me more time to set my fingers up correctly. 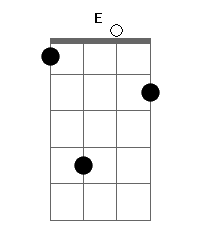 A quite rare alternative is to play 4402, this is similar to the regular version of E but with an open E string. This means your four strings are playing B-E-E-B in effect playing just two notes but with four strings and usually ever so slightly out of tune from each other. It makes a cool drone like effect.

This is also easier on the fingers with less cramping up as you only have two fingers on the fourth fret. 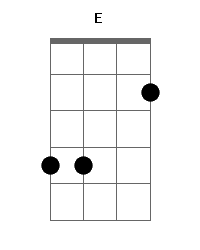 In this method you simply do not play the G String on your Ukulele but still keep the typical shape on the other strings. This has the advantage of using few fingers, saving you time when applying them to the fret board and reducing the likelihood of one being incorrectly placed, and causes less cramping on the fret board. However, it can be tricky to not play the high g string especially when you start out (a way round this is to “mute” the string by placing a finger or thumb gently on it with not enough pressure to fret it, but enough to stop it vibrating.) 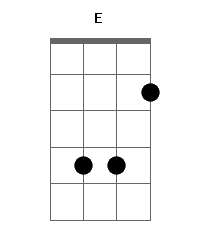 The “A” chord shape can also be used to create an E chord much higher on the neck. This can be done by barring the neck at the Seventh fret or by using individual fingers for each of the strings. This version of E will sound much brighter and higher than other mentioned methods because all the notes are higher.

The downsides of alternative methods of playing

Of course, there are downsides of these alternative methods of playing the E chord as eluded to above. The open E string can cause some dissonance with the C string at the fourth fret if they are slightly out of tune from each other. This can cause a nice effect but sometimes it just sounds wrong. Playing 4447 introduces a higher note in the chord which changes the character of the chord and can make it sound brighter than a standard E chord. And finally some of these chords are more difficult to change to from other different chords.

However, when all is said and done, there is no harm in trying out some variants and seeing which option you find the best and easiest to use.

What chords do you find difficult to play and have you found any shortcuts?