Songwriting can be a difficult process of bringing an idea from nothing into something. Of getting an idea and then turning that idea into a whole song. As such it’s important to have a great tool to help you with the whole process of songwriting. From capturing your first idea to finishing the final version of the song. That’s why I use Evernote for songwriting. 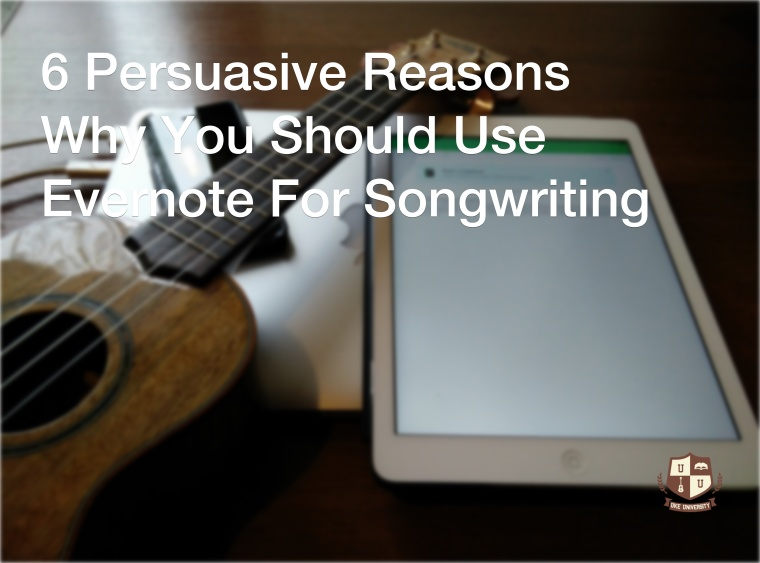 With the #ukesongsday challenge running I thought It would be a good idea to let you know about my favourite tool for songwriting, Evernote, and how I use it to help me capture and develop song ideas.

I’m not saying you have to adopt Evernote, you might have a solution which works better for you and includes some of the benefits and reasons I state below, but for me, Evernote has become the best song writing tool I have found.

One of the key features of Evernote is the ability to access and create a note on any device (as long as you have an Internet connection. This means you can quickly access your song ideas anywhere, or quickly add a song idea while you are on the go which you can easily access later. It is also available on basically any device, android, pc, Mac etc and you can even access your ideas on the web if you are out and about and want to show someone one.

2. Evernote is easy to search

If you’ve ever lost a great song idea you’ve had, you’ll know how frustrating it is to not be able to find an idea once you’ve written it down. With Evernote’s searching tools you’ll be able to easily search through and grab the idea you want. You can search by location where you wrote down the idea, date, name, tag, notebook and more. There are plenty of options to organise your notes but ever notes search box will help you find your idea.

3. Evernote has multiple file types in one place

For the longest time I would write a song, be pretty pleased with it and then come back a day later and have no idea how to play one part of the song (or occasionally the whole song!) the problem is I had no audio record of how the song went so I’d have to try and recall from memory how it went.

Now, with Evernote, I can save a written note with an audio record of how the song goes (and include a picture with the chords that I’m using. In fact, if I wanted to brainstorm a song idea and created a mind map to help me think along the way, and then save a picture of the mind map with anything else you want.

4. You can draw chord charts

Speaking of which, in android you can “hand write” a note, so if you are using some strange chord, or you have created your own unique one, then you can write it into a note. Even if you don’t use android, you can use the sister app “penultimate” and sketch in that app but save it to Evernote.

If you are song writing with a partner you’ll want them to be able to look over your ideas. In Evernote, you can share your notes with them via a shared note or notebooks. You’ll need a premium subscription to let them edit them as well but letting them view them will at least give them the option to give you feedback. This makes Evernote for songwriting with a partner a great tool.

With Evernote, you can use the built in camera of your smartphone, tablet or computer to scan in a piece of paper. This might seem against the spirit of Evernote (as it is digital) but I think it is just part of the whole package with Evernote. I love using paper to get initial ideas down, or sketch out ideas with mind maps and using the Evernote camera to save those ideas means that I can access them later with little effort and without the need to keep my notebook with me and I know that I won’t lose that pei e of paper.

One reason not to use Evernote

Although I love using Evernote for songwriting, sometime I need to step away from it. You see, I find songwriting really difficult with the distractions of the internet. The temptation to “keep researching” (though I’m not sure how twitter counts) or the easy of getting caught up in something else which is very “important” means that having any form of connection to the internet can lead to me putting off songwriting. Not every time, but more than I care for. I’m sure I’m not alone there but I’m also sure there are other people who don’t have this issue at all.

As such I do still love using a good old fashioned piece of paper and pen, at least for the first draft. And just see where it goes.

How do you like to write songs? Do you use a traditional paper notebook or one of these fancy songwriting apps? Leave a comment below.

Earlier this year I found out about the amazing Jonathan Mann (aka song a day man). For the last 2129 days (since I last checked) he has released a song a day (and this is why I’m challenging you to write a ukulele song everyday for novemeber). 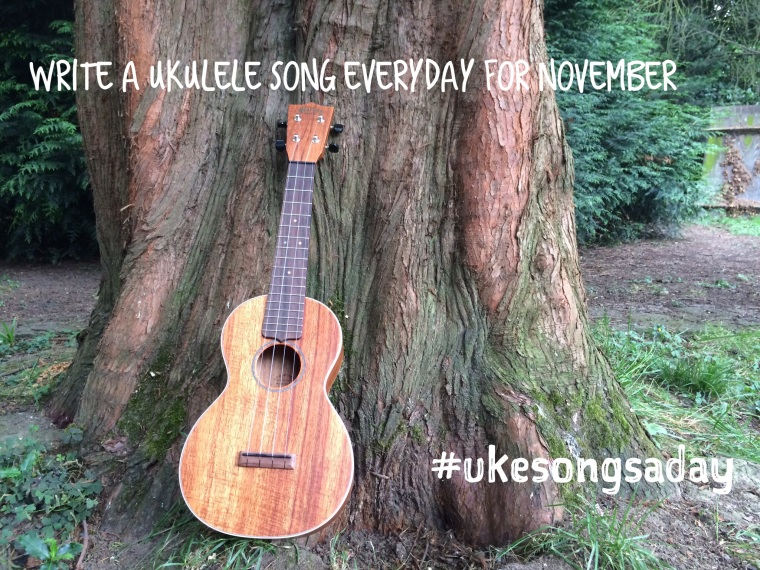 A pretty impressive achievement, but as he says they aren’t all fantastic. Some are brilliant and have been featured in things like Apple’s response to “antennagate”, some are theme songs to podcasts and a few are even part of a Harry Potter opera. Others don’t have many views and are…okay. But that’s the point, to create good songs, sometimes you have to get the crap songs out of the way.

So I’m setting myself (and you if you’re up for it) a challenge. For the month of November, let’s write a ukulele song everyday.

Because I’m playing off NaNoWriMo (national novel writing month) which is in November, plus I’m finally settled in my new house so it’s the first opportunity I’ve really had to do it.

How should I take part?

That’s up to you, I suggest you get a nice paper notebook or maybe use an electronic solution like Evernote or Dropbox, (I prefer Evernote as you can have audio, text and even handwritten notes in one file. Great for recording a sample and sketching the chords out).

When you write a song then you’ve done your days task. If you don’t write a song that day, no problem just try and catch up later. Whatever happens don’t feel guilty if you don’t make the mark, this is to encourage you to write more songs. I know that I won’t be able to do a song for the first day or two as I’m traveling without a ukulele but I’ll try to make up for it later.

If you want to share it on tumblr/sound cloud/other then add the hashtag #ukesongaday and we’ll be able to follow each other.

Can I continue after November?

of course, in fact that’s why I have chosen a hashtag with an open title like that. It’s also worth considering that 30 days is supposed to be enough to get your average habit started (the difficulty of the habit and the person can make this vary). So if you want to continue after the month finishes, then please do. I’m certainly hoping I will, even though I know I won’t be able to start properly.