During the classic film Wayne’s world, Wayne is at a guitar shop and picks up a beautiful white start (shhher-wing) and prepares to bust out a tune to impress his lady friend. He hits the first couple of notes and the store clerk stops him, and points out a sign reading “no stairway to heaven”. 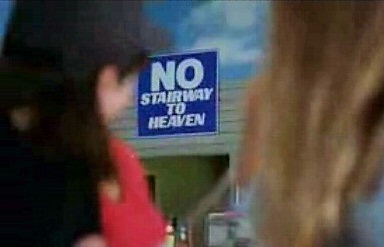 Stairway to heaven was one of those songs that everyone had to learn on the guitar, it was a right of passage and so you could imagine how annoying it was for employees of a music shop to hear the same song again and again and again! But is there a ukulele “Stairway to Heaven”? A song so often played (well and poorly) that is both a right of passage for a ukulele player and annoying for anyone listening. I’m not sure but I’ve got three contenders.

1. Somewhere over the rainbow/what a wonderful world (iz style)

Israel kamakawiwo’s brilliant cover of somewhere over the rainbow which merges into what a wonderful world may have been a key factor in the recent revival in the ukuleles mass popularity but it also has dangerous signs of being the ukulele’s stairway.
It’s very popular, in fact on most ukulele chord sites, it’s the top search result. It’s played a lot (I’ve personally played it at open mic nights a good number of times) and it’s easy to imagine it being a song to test out your brand new ukulele with.

However, it doesn’t seem to have quite the same “here we go again” feel of stairway, most reactions I’ve had to somewhere over the rainbow have been positive.

Jason mraz’s top hit song may have been originally recorded on the guitar but it has truly become a ukulele classic now. It has a few more tricky chords for ukulele players that separate it from somewhere over the rainbow. There is also a very cute video of a little kid learning the ukulele ying and singing along.
Perhaps the most damming piece of evidence for the potential “stairwayness” (trademark pending on that term) is the number of videos on tumblr of people learning to play this song despite its release a few good years back now.

Personally I’m yours has become a “oh no not again” song for me. I’ve just heard it too many times on guitar and ukulele. I’ve heard great versions and terrible versions and I almost expect someone to play it when they pick up the uke now.

Another key song in the resurgence of the ukulele, this has to be one of the highest chart songs driven by a ukulele in recent history. If people want to know what a ukulele sounds like then you could probably get away with telling them that it’s in this song, and they’d have some idea.

However, it doesn’t seem to have been adopted by the ukulele faithful. Maybe it was just a summer hit or perhaps it’s just not the sort of thing people want to play. Whatever the reason, it’s not the ukulele stairway.

Riptide by vance joy has ripped (pun not intended) the charts and become a ukulele Classic in no time. The chords are simple, the strumming pattern is fun and easy to get to get to grips with and its been featured in a modern classic viral video. If I’m yours is a popular YouTube and tumblr video, riptide is the king (at the moment). Dozens of covers of this song are released every day.
The biggest reason why this can’t be the ukulele stairway (yet) is that it is too modern. It’s just come out and hasn’t proved that it has staying power or worn people down into hollow shells due to its constant repetition. Maybe it will, but probably it won’t. Don’t get me wrong, it’s a good song but it’s no stairway.

Well you can play it on the ukulele. Click here to see the tab.

What do you think?

Honestly, it’s a tough choice but personally I’d choose “I’m yours”, it feels more repetitive, I’ve heard it more (both guitar and ukulele and it seems to be a “must learn” song for ukulele players. But that’s my choice and I can definitely see why “somewhere over the rainbow” deserves the crown as well.
what do you think? Which song is the true ukulele stairway to heaven?

Category: inspiration
Disclosure of Material Connection: Some of the links in the post above are “affiliate links.” This means if you click on the link and purchase the item, I will receive an affiliate commission. Regardless, I only recommend products or services I use personally and believe will add value to my readers. I am disclosing this in accordance with the Federal Trade Commission’s 16 CFR, Part 255: “Guides Concerning the Use of Endorsements and Testimonials in Advertising.” http://ukeuniversity.net is a participant in the Amazon Services LLC Associates Program, an affiliate advertising program designed to provide a means for sites to earn advertising fees by advertising and linking to amazon.com.